Most people living a hundred years ago would never have been capable of imagining a world like we have today. The continued accumulation of century after century of open-minded and rational thought will ensure the human race becomes a more sensible, compassionate, and equitable civilisation.

How do we spread prosperity so that everyone enjoys a high standard of living? Will we always have a situation where some in society live in obscene wealth while others in abject poverty? Compounding this problem is the disappointing fact that while the majority of people would like to see more done to help the disadvantaged, it more often than not comes with the proviso, to borrow from Pink Floyd, “Share it fairly, but don’t take a slice of my pie.”

The truth is that the task of distributing the world’s resources so everyone has the opportunity to enjoy a high quality of life is beyond the scope of our current political and economic systems and, sadly, also beyond our ethical beliefs. The undeniable fact is that there is more than enough wealth to go round, what’s lacking is simply the means – by which we mean the overwhelming desire by the vast majority of people – to make it happen. And while taking from the rich and giving to the poor Robin Hood-style might balance things up in the short term, it doesn’t really address the fundamental structural inequalities in our society. Soon the poor are the new rich and the rich the new poor. It’s clear that a whole new approach to the sharing of the world’s prosperity is required.

The Evolutionary Party is advocating for those with both wealth and the means to create it to voluntarily use this privilege to create a world where everyone has the opportunity to exist in the best possible circumstances.

The fundamental problem of getting people to part with wealth they don’t really need, and often don’t deserve, is the misguided concept that being rich is seen as being successful. After all, affluence has traditionally been society’s way of rewarding those who’ve made it to the top of the hierarchy, and the right to accumulate wealth has become entrenched both in our economic systems and in our way of thinking. Mixed up with this confused logic is a misconception that prosperity is simply out there waiting for those who work hard, or are clever enough, or perhaps lucky enough, to get it. And while there may be some truth to this, it is far from the whole picture, or anywhere close to a realistic aspiration for the great majority of people. Plus wealth is not inelastic (as those with it are inclined to think), we can’t all be as rich as moguls and movie stars. There’s only so many ways to cut the pie!

Advocating for a world where wealth is more freely spread does not mean that everyone should live a dull grey lifestyle, as reactionaries paint a world where equality is at the core. The Evolutionary Party simply believe everyone should be entitled to the benefits of a civilised society. It’s also natural for people to want different things, and to express their individuality. Hence, there will still be those who wish to live ascetically and those wanting to make a more flamboyant personal statement. The important thing is, however, that the former will be a philosophical choice and not a trap, as it is for so many people today, and the latter won’t be accompanied with unconscionable wealth.

There are of course many other reasons for our moral apathy toward excessive wealth accumulation and distribution. Some argue that without massive financial rewards as incentive, along with the freedom to do virtually what one likes with that money, people would not feel obliged to work hard and achieve success. Security also plays a part; affluence can buy protection from anxieties. There are legitimate concerns about one’s offspring’s future, and the list goes on. However, the symbol or status of “success” that society affords those with great wealth is what still blinds most people from questioning our current ideology.

Affluence is clothed in glamour, and, as already mentioned, held up as the one thing we should all aspire to. Even untalented and ignorant people endowed with money commonly see themselves as superior in status to those less fortunate. The symbol of success wealth brings to individuals often inflates both their egos and sense of self- 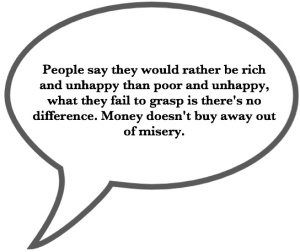 importance. Mediocre talent, if coupled with high remuneration, is glorified. The quest to be seen as successful encourages individuals to seek more and more money, leading to a preoccupation with activities that produce the greatest financial rewards, often at the expense of pursuits for the greater good of humanity. Wealth also buys considerable influence over the way in which society functions, ensuring the notion “right to riches” is deeply entrenched in our subconscious.

It’s obvious then that in working to eliminate poverty and creating a fairer and more equitable world, our current correlation between wealth and success needs to evolve. The crux of the issue is how we reward people for their contribution. Wanting one’s skills and talent recognised is of course only natural, and the simplest way to do this is to be paid money. However, in truth, people don’t need massive financial remuneration to be happy. To simply be appreciated, and be able to live in relative comfort, within a free, safe and secure environment, is all that is required. Foregoing enormous material wealth to create a place like this for “everyone” would of course become its own reward. Would it, though, stifle both creativity and the desire to succeed? We doesn’t believe so. A genuine passion to be at the top of your game, combined with a sense of social responsibility, will keep people both inventive and motivated. From Einstein to Fred Hollows, the list of great achievers, whose motivation to succeed was in no way influenced by money, goes on.

A world where the overwhelming majority of people look down on ostentatious displays of wealth, and in which success is measured by one’s constructive involvement within society, would be a far different place than it is today. The shift in thinking of this magnitude would bring many other welcome changes in its train. Civilisation would undoubtedly become a safer place, war as outdated as blood sports. We’d also see the influence of dogma (especially religious) replaced with common sense. Education would be far more widespread, with an emphasis no longer on the individual, but on the common good.

Is a change in our society as radical as just described really a feasible proposition? While humans can be compassionate, aren’t they, to a far greater extent, susceptible to greed, selfishness and pride, therefore incapable of living in peace, let alone sharing the world’s riches equitably?

It’s possible of course life in the future will be like in most science fiction movies – the same as today with just more whiz bang toys. However, evolution is not just technological development. As we continue to progress as a society ideological attitudes advance as well. A growing number of enlightened wealthy citizens are beginning to question the widening gap between them and the poor, and philanthropy is on the rise. While this is still a long way from actually repudiating the accumulation of massive wealth, it’s a start. Of course there are still many rich and powerful people who don’t want change, and work actively to prevent it. However, with the continued support of the democratic right to be heard, we can and will evolve. Most people living a hundred years ago would never have been capable of imagining a world like we have today. The accumulation of century after century of open-minded and rational thought can ensure the human race becomes a more sensible, compassionate, and equitable civilisation.

Unless of course some conservative crackpot blows us all up first!

There is a real alternative to current political and economic thinking – though it’s up to us to change!

The Evolutionary Party is an Incorporated Association in Victoria Australia.